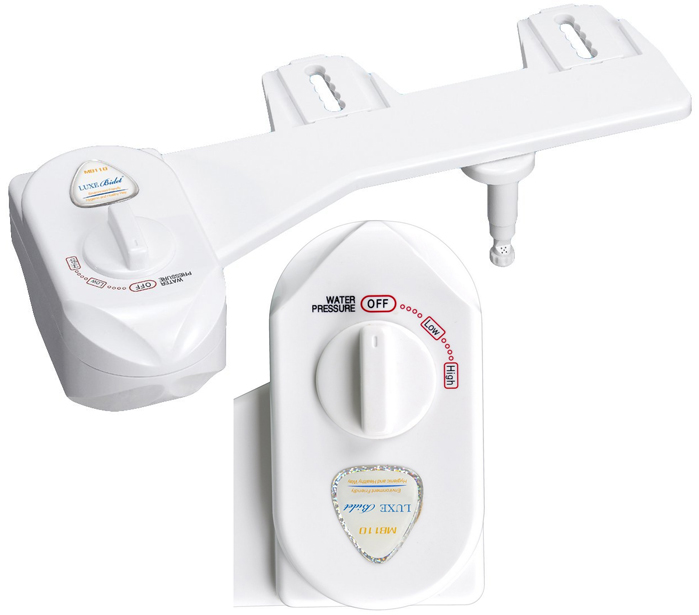 The MB110 is Luxe Bidet’s entry-level model. Not surprisingly, it offers the fewest features, but it performs the basic functions well enough.

It is made exclusively of plastic, but the plastic parts are fairly sturdy. The pressure is adjustable via an easy-turn dial right near your right hand. However, because this model offers a cold-water connection only, the temperature is not. What comes out of the cold-water home supply is what touches your skin.

The MB110 has a retractable nozzle, which keeps it out of the way when not in use and helps keep it cleaner. The unit comes with a 1-year warranty. One of the best upsides with this model is you have to spend only about $30 – as of this writing – to get a bidet that installs in minutes and provides all the basic cleansing features. 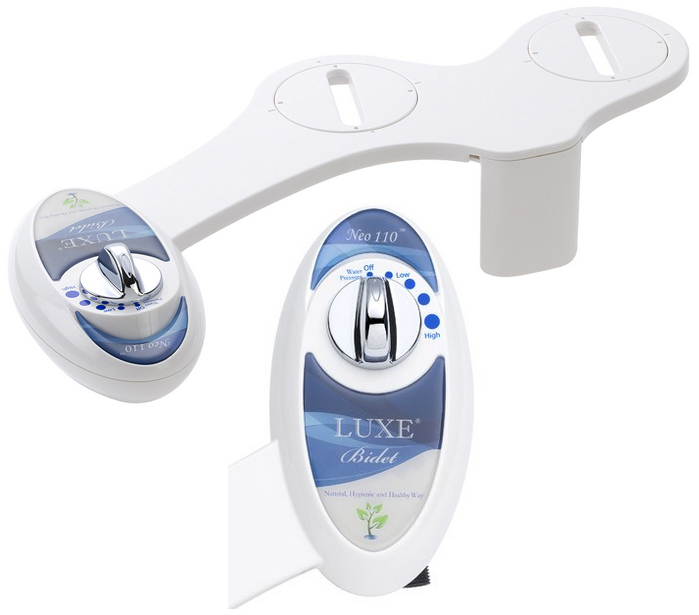 The Neo 110 is the next step up and it shows. The design is more attractive and this model introduces several new features. It installs just as easily – you just detach your toilet seat, place the bidet attachment, replace the seat and retainer nuts, and connect the water line.

Unlike the MB110, however, the Neo 110 uses a metal braided hose, and its valves have a metal/ceramic core, just like your bathroom faucet. In addition to better materials for some key parts, there’s a nozzle guard gate to keep the nozzle more sanitary.

The controls are more attractive, though they feature about the same level of simplicity. You have a dial (this time, chrome plated) that lets you set any of four pressure levels. At 18 months, the warranty is better, too. Equally pleasant, and quite surprising, the regular price (and the discounted price) on Amazon is about the same (or sometimes even less) than that of the MB110. 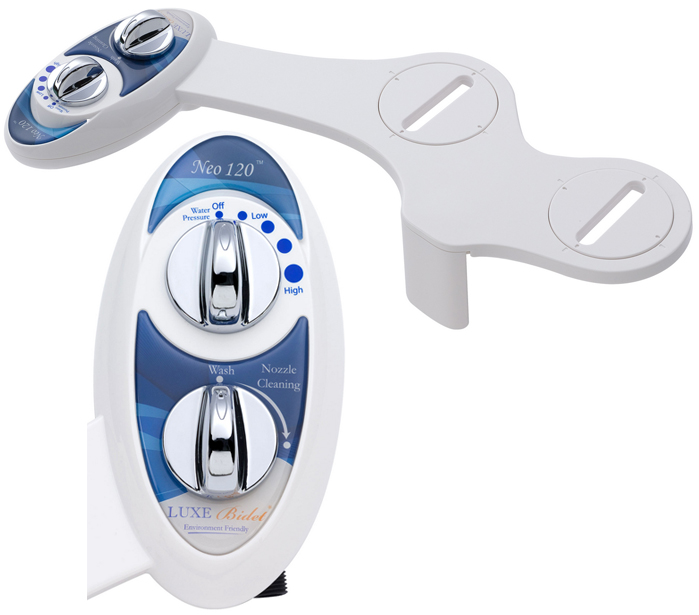 The next step up is the Neo 120. Again that step up is a real boost. This model offers all the foregoing features of the Neo 110 but adds a second dial to allow you to select a posterior wash or nozzle cleaning.

The unit sprays water over the wand tip after use (at your command), in order to lessen the need to do so manually. There may still be times you want to spray with a little bleach-based cleanser and give a short scrub with an old toothbrush, but this will make those times much less frequent.

The installation process is the same, the warranty is still 18 months, and the price is a bare few dollars more than the Neo 110. Life is looking better every minute. 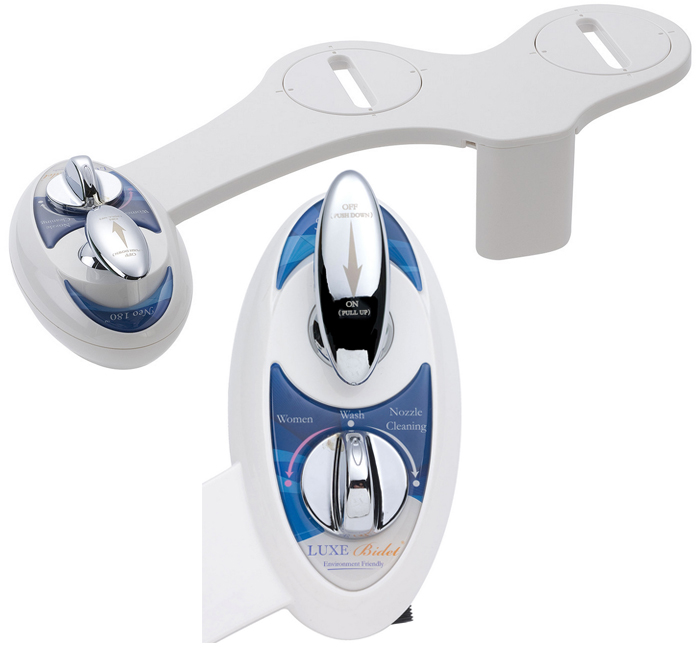 Once again, as we increase the model number we see a corresponding increase in function. Sadly, that’s not always true for bathroom products in general. Here, the Neo 180 – available in a blue version and white version – is much like the Neo 120 but doubles the number of nozzles.

That second nozzle provides for a feminine wash feature, in addition to the usual posterior cleansing option. Both retract when not in use. There’s about a $10 jump in the price above the Neo 120, but that one feature alone will more than justify the increase for a large percentage of buyers.

The self-cleaning ability is extended to both wands/nozzles. There’s still a moveable nozzle gate to amplify hygiene and make maintenance easier. There is the same high quality steel-braid connection hose. However, the pressure dial has been reworked here to be even easier to operate. 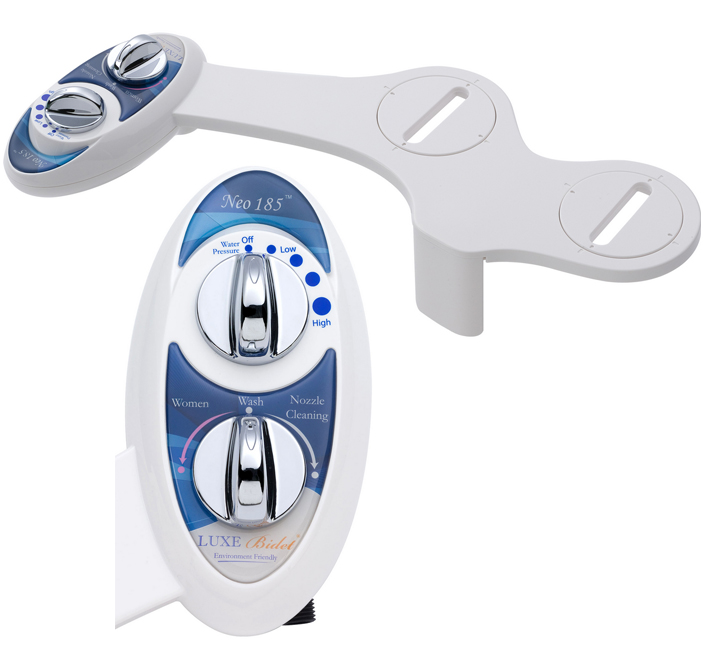 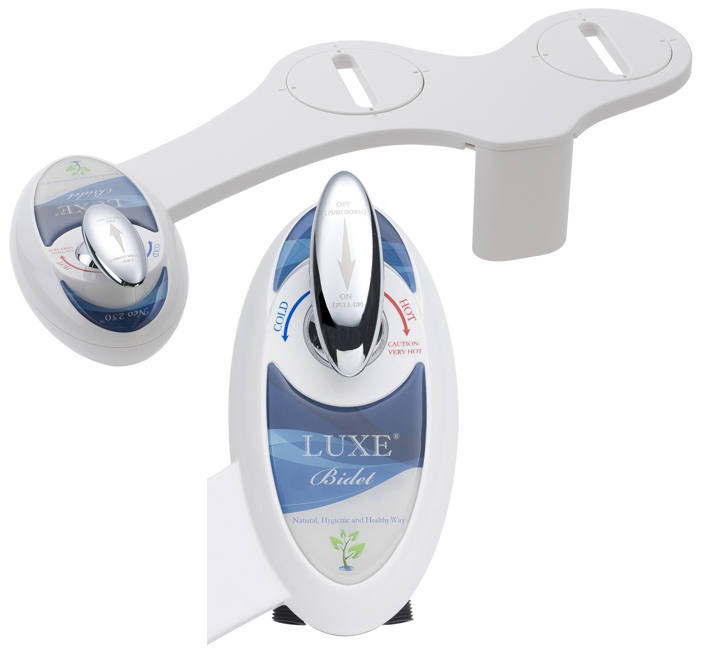 Continuing the trend, the Neo 250 represents yet another step up in function from its cousins with lower model numbers. The big addition here is the inclusion of a hot water connection, a definite must-have for a lot of buyers, yours truly included.

Here, that big oval handle we saw on the Neo 180 is used first and foremost for a temperature adjustment control. That same control is also used for pressure adjustment, as on the Neo 180. You press down, then twist. A little tricky to master at first, but not particularly stiff or difficult.

Oddly, the Neo 250 takes also a couple steps backwards in terms of features.

There’s no self-cleaning nozzle on the Neo 250. And, that nozzle is the only one; there’s no dual-nozzle arrangement as there is on the Neo 180/185. That makes for a really tough tradeoff – feminine wash or warm water? Not an easy choice. 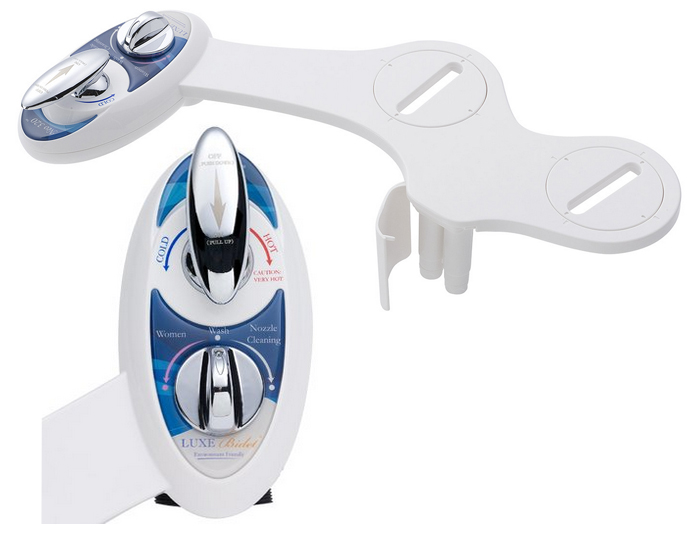 Fortunately, the Neo 320 resolves the dilemma introduced by the Neo 250.

It houses the same hot water connection feature with the same metal/ceramic valves. Users that require a warm water bidet get both the comfort and extra cleansing ability only possible this way.

The cold water connection hose is the same steel-braid as used elsewhere. But the hot water flows inside a polyurethane hose that’s durable and very flexible. Yet, it has a metal connector for a secure fit.

At the same time, the Neo 320 doesn’t sacrifice functionality for women. It has the self-cleaning dual nozzle arrangement found on the Neo 180/185. So, you get the options for feminine wash and posterior cleansing.

Which To Choose? – Why I Recommend the Luxe Bidet Neo 320

The warm water feature of the Neo 250 and the Neo 320 make these the only models I personally would even consider. The other models are fine. The materials are durable and precisely made. The controls are simple and easy to operate. The pressure is adequate or better. But in a place where winters can produce water from the tap that is uncomfortable on the hands, I’m not inclined to let it touch even more sensitive parts.

The lack of a self-cleaning dual-nozzle arrangement on the Neo 250 makes the choice even easier. So, for my money, there’s really only one option: the Luxe Bidet Neo 320. If you’re on a very tight budget, you might very well find one of the lower-end models perfectly satisfactory. But even the high-end Neo 320 bidet only sells (at discount) for about $55 as of this writing.